Tracking down the original owner of a star wars novel

If you had brothers and sisters growing up then the best way to make sure that your toys and books always came back to you was to write your name on them somewhere. 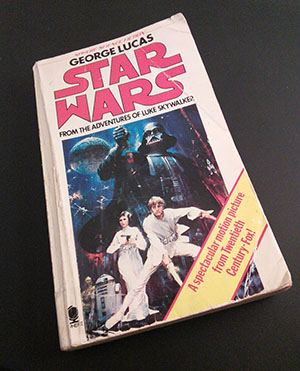 I have many items in my collection that have initials written on them, Star Wars figures with letters on their feet, annuals with a child’s name written in the front, or a lovely message from an Aunt or Uncle giving a book as a Christmas present. I love finding items like this, it adds an extra bit of history to something that was once well loved.

My friends all know that I collect toys from the 70s and 80s so I quite often get calls saying they have spotted an interesting item and would I like them to pick it up for me. On a recent occasion one such friend brought over a copy of the Star Wars novel by George Lucas based on the first movie. It was pretty tatty looking but still a great item.

Film novels from the 70s and 80s often came with a picture section in the middle few pages that would contain stills from the movie and the Star Wars novel has a great set of these. I have quite a collection of these types of books as the picture section has gone out of fashion. But in the 70s when you didn't have a video player, or the ability to re-watch a movie whenever you wanted, the picture section allowed you to re-live classic moments from your favourite films.

But what really caught my eye in this book was the name written in the front. Not only had the original owner written their name, but also the first line of an address. And that got me thinking, would it be possible using the power of the internet to track down the original owner of this book 30 odd years after it was published. 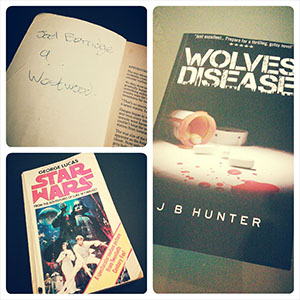 My friend had picked the book up in Bridport, Dorset, but that didn't necessarily mean that the owner lived in that area. I did some searching with the information I had but as the road name was quite common I couldn't be sure and on facebook there was no one with the same name.

So I did all I could and sent out a tweet:

"Does anyone know Joel Berridge? I just bought his copy of star wars! #vintagetoys #starwars #uk"

It got re-tweeted a few times, but there was no word from Joel. So I put the book on a shelf and forgot about it. 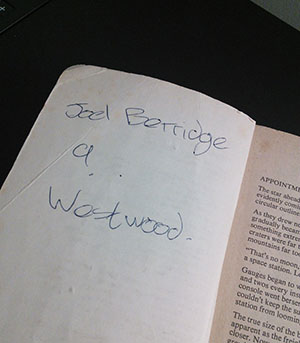 Six months later I got a message in my inbox.

Joel, now J.B Hunter was new to Twitter and had seen my message. It turns out he had used to live in Dorset and was now in London where he is a writer having just recently published his first novel 'Wolves Disease'. I'd like to think it was his love of the Star Wars novel that got him into writing!

So after 30 years I was able to return to Joel his childhood copy of a much loved book. And it just goes to prove that by writing your name in your books and on your toys that they can always find their way home.